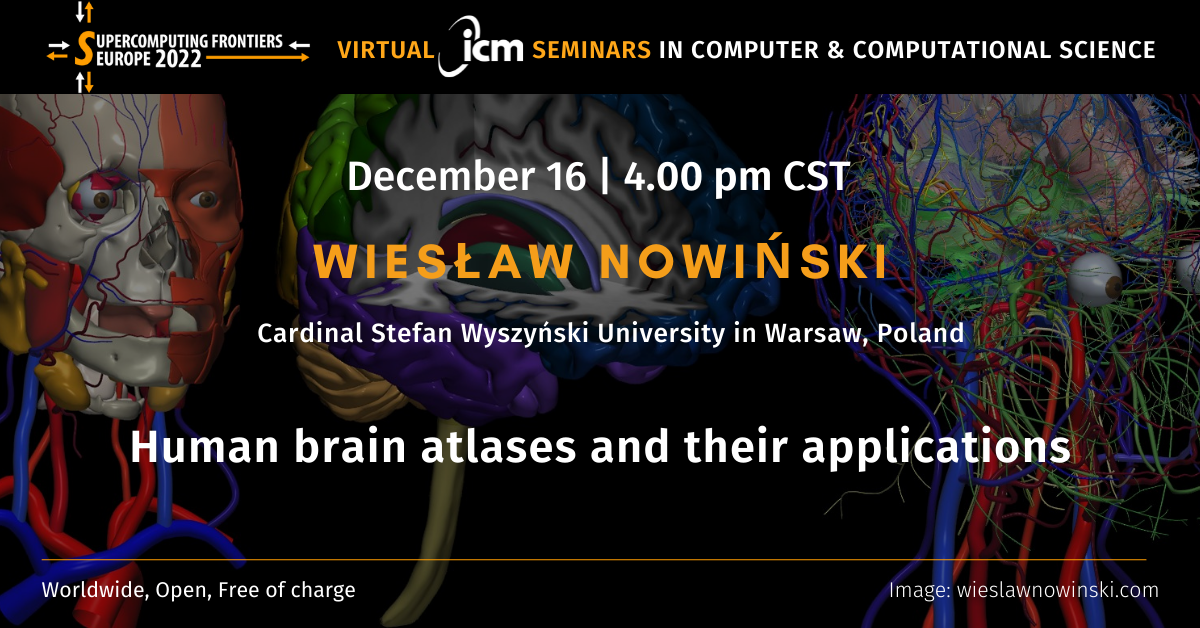 ICM University of Warsaw is proud to invite everyone to #VirtualICMSeminar with scientist, innovator, entrepreneur, pioneer and visionary Prof. Wieslaw Nowinski- creator of “world’s most gorgeous” human brain atlases!

“If a clinician helps thousands of patients and a researcher could help thousands of clinicians, then doing medical research is the most rewarding job.“– Wiesław Nowiński

What is a brain atlas and why is it so important to develope it? It provides a spatial reference systems for navigating, characterising and analysing neuroscientific findings on the basis of anatomical location. Prof. Nowiński will share his experience in brain atlas creation and the development of atlas-enabled applications for neuroeducation, brain research, neurology and much more.

ICM is very proud to host such an excellent scientist during its 20. Virtual ICM Seminar meeting. Wiesław Nowiński was named The Outstanding Pole in the world in 2012, as well as commemorated on a stamp issued by the Polish Post in 2018 to honor Polish inventors of the century (within two living inventors). He used to work at Agency for Science, Technology and Research in Singapore were he was a lead scientist, currently he works at Cardinal Stefan Wyszyński University in Warsaw, Poland.

Don’t wait and grab your FREE ticket to #VirtualICMSeminar,

this Thursday at 4pm CST!

Professor Wiesław Nowiński builds bridges between science, medicine, and art, focusing on the human brain. His research includes electronic atlases of the human brain in health and disease, stroke, deep brain stimulation, neuroinformatics, brain quantification, medical image processing and analysis, human body modeling, virtual reality, surgical simulation, interventional radiology and teleradiology simulation, computer-assisted diagnosis and treatment, and future directions in computer-aided radiology and surgery, among others. His research has resulted in several discoveries about the human brain. Dr. Nowinski has discovered the functional laterality of the subthalamic nucleus – a major target in the surgical treatment of Parkinson’s disease and other neurologic disorders.

Interdisciplinary Centre for Mathematical and Computational Modelling – ICM University of Warsaw gathers outstanding scientists in a series of Virtual ICM Seminars, which started back in March 2020. With 19. meetings so far and more than 1550 participants, ICM invites YOU to join its next seminar.

The website with access to the SCFE and seminars’ recordings, has been visited by more than 20k visitors from 122 countries. For the listing of all ICM seminars please check this link with recordings.

16th November, 2021
Supercomputing Frontiers Europe 2022 to be held July 11-15, 2022
BACK TO THE BLOG
This website uses cookies to improve your experience. We'll assume you're ok with this, but you can opt-out if you wish.    Accept
And here is our Cookies Statement.