15th December, 2021
Virtual ICM Seminar with prof. Wiesław Nowiński: “Human brain atlases and their applications”
BACK TO THE BLOG 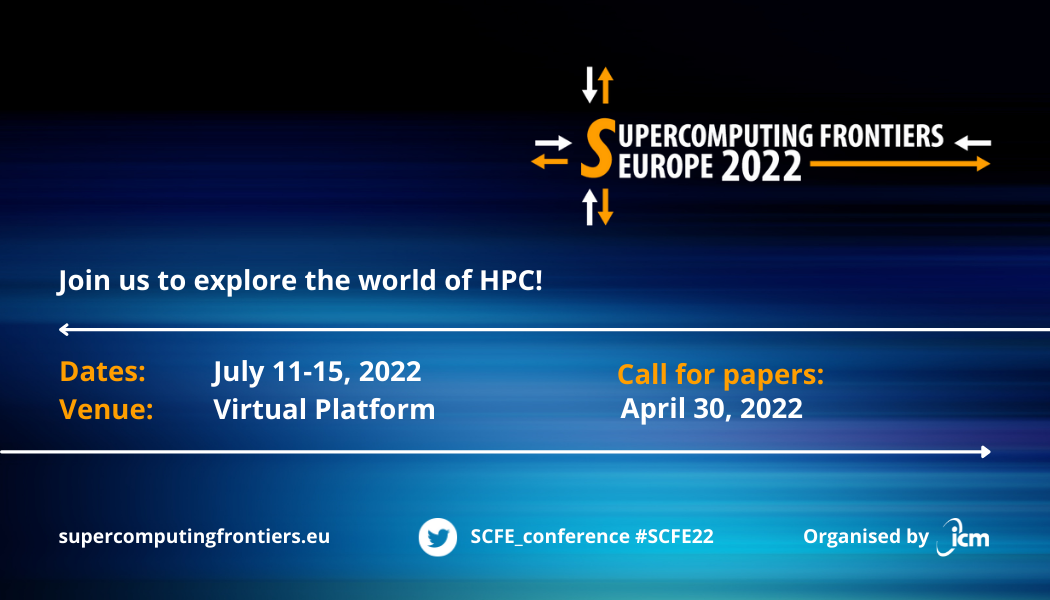 Supercomputing Frontiers Europe will take place from 11 to 15 July. The conference is organised by the Interdisciplinary Centre for Mathematical and Computational Modelling (ICM), University of Warsaw.  The event aims to enable the widest participation of HPC enthusiasts from all around the world, to learn, share and advance. Save the dates! The last edition of Supercomputing Frontiers Europe was a success with more than 800 registrations, from 77 countries. The conference gathered 43 distinguish speakers including 4 keynote speakers: Irene Qualters from Los Alamos National Laboratory, Anders Jensen, the Executive Director of the EuroHPC JU, Hiroaki Kitano from The Systems Biology Institute and Roberto Car, the recipient of the 2020 ACM Gordon Bell Prize, from Princeton University.

“We are witnessing a very interesting period of intense, concerted and carefully planned European engagement in the global supercomputing development which allows us to be on the right track to establish SCFE as a permanent forum for discussing new ideas and emerging technologies in supercomputing. ”  – says Dr. Marek Michalewicz, committee chair and Supercomputing Frontiers conference creator.

SCFE strives to give an open space for the HPC community to interact and discuss visionary ideas. The annual event is attended by scientists, researchers, supercomputer centre’s managers, students and representatives of leading technology vendors and start-ups. Each year the organisers prepare free workshops for the audience to participate in, delivered by the leaders of the field.

The tentative topics for SCFE22 will be:

Any other topic that pushes the boundaries of computational science and supercomputing to exascale and beyond.

Submitted papers will be subjected to a peer review and carefully evaluated based on originality, significance, technical soundness, and clarity of exposition. All authors of accepted papers from the conference will be invited by the SCFE22 program committee to submit and publish their paper (after further independent review) in a special issue of the international journal of Supercomputing Frontiers and Innovations.

The Interdisciplinary Centre for Mathematical and Computational Modelling (ICM), University of Warsaw, is involved in interdisciplinary scientific research based on mathematical modeling, computer simulations, modeling, multi-scale and large-scale computations. The popular meteo.pl weather portal for over 25 years has been providing the most accurate weather predictions for Poland and is visited about 200 million times annually. ICM researchers created decision support tools for global civil aviation (in collaboration with ICAO). For nearly a year now ICM is supporting the Polish Government and crisis management authorities in Poland by providing short and long term predictions of  epidemic in Poland using ICM Epidemiological Model for the COVID-19 . ICM plays crucial role in securing access for Polish scientists from over 500 institutions to the entire body of scientific literature, including over 26,000 journal titles, and over 150 000 book titles by maintaining the Virtual Library of Science. ICM networking team has participated in a number of cutting edge networking solutions, both for high throughput and low latency requirements. In 2019, ICM engineers have established a production 100Gbps connection over 12,375 4 miles CAE-1 (Collaboration Asia Europe-1) line between Warsaw and Singapore.

15th December, 2021
Virtual ICM Seminar with prof. Wiesław Nowiński: “Human brain atlases and their applications”
BACK TO THE BLOG
This website uses cookies to improve your experience. We'll assume you're ok with this, but you can opt-out if you wish.    Accept
And here is our Cookies Statement.