Grab your FREE ticket for summer with HPC!

26th May, 2021
Virtual ICM Seminar with prof. David Winkler: “Computational insights into the origin of SARS-CoV-2 and repurposing of drugs for COVID-19”
BACK TO THE BLOG 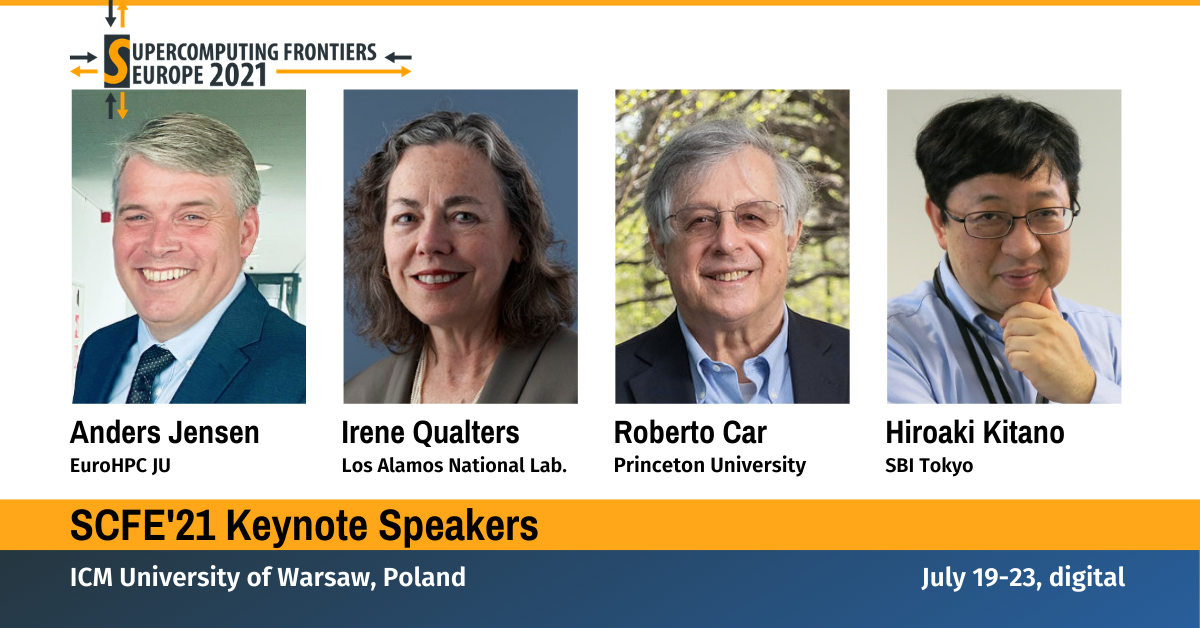 The leaders of the field: Anders Jensen, Irene Qualters, Roberto Car and Hiroaki Kitano will report on the most important developments in supercomputing and computational science.

The SCFE organizers are thrilled to announce this year’s keynote speakers. The conference, organized by Interdisciplinary Centre for Mathematical and Computational Modelling University of Warsaw, Poland, will be held digitally between July 19-23, 2021.

“SCFE is designed to fill the niche among several excellent and much bigger, more generalist conferences. The main emphasis is on “frontiers”: bold visions and ideas that might shape future progress; new computing technologies enabling scientific discoveries, and development of new methods of computation and analysis, as well as lowering barriers to access computational power for new groups of users and in much wider geographies.” – dr. Marek Michalewicz, General Chair of Supercomputing Frontiers Europe 2021, Director of ICM University of Warsaw.

Here is the lineup of SCFE’21 keynote speakers:

Anders has a lifelong interest in supercomputers, dating from his time in university. He started his professional career with 10 years of engineering work developing computing hardware, firmware, and software for embedded systems. He pioneered IEEE802.11 wireless network technology in the nineties while working for Symbol Technologies. After a decade working with hardcore engineering and product development, Anders shifted into management as he joined Cargolux Airlines International as Director IT. In 2011, Anders was selected as the Director ICTM for the North Atlantic Treaty Organization (NATO), responsible for all Information and IT services as well as one of the largest classified networks in Europe. In 2020, Anders was appointed as Executive Director for the European High Performance Computing Joint Undertaking, a joint initiative between the EU, European countries and private partners to develop a World Class Supercomputing Ecosystem in Europe with a proposed budget of 8 billion euro.  Anders holds a Master of Science Degree as well as a Master of Business Administration degree from Technical University of Denmark. He is based in Luxembourg, married to Mette, father of two.

Irene had a distinguished 30-year career in industry, with a number of executive leadership positions in research and development in the technology sector, prior to her NSF career. During her 20 years at Cray Research, she was a pioneer in the development of high performance parallel processing technologies to accelerate scientific discovery. Subsequently as Vice President, she led Information Systems for Merck Research Labs, focusing on software, data and computing capabilities to advance all phases of pharmaceutical R&D. As Associate Laboratory Director of Simulation & Computation, Irene Qualters directs programs that provide cutting-edge tools to guide and interpret experiments and further the fundamental understanding and predictive capabilities of complex systems. She has previously served as a Senior Science Advisor in the Computing and Information Science and Engineering (CISE) Directorate of the National Science Foundation (NSF), where she had responsibility for developing NSF’s vision and portfolio of investments in high performance computing, and has played a leadership role in interagency, industry, and academic engagements to advance computing.

Roberto is a theoretical condensed matter physicist and physical chemist. He is known for the ab-initio molecular dynamics method that he introduced with Michele Parrinello, and for electronic structure and simulation studies of disordered systems. Car was born in Trieste (Italy) and graduated from the Milan Politecnico (Technical University of Milan). After postdoctoral appointments at EPFL (Switzerland) and at the IBM TJ Watson research Center, he held physics professor positions at SISSA and at the University of Geneva (Switzerland). Since 1999 he is professor of chemistry and the Princeton Institute for the Science and Technology of Materials at Princeton University, where he is also associated professor of physics and the Program in Applied and Computational Mathematics. Car has been awarded numerous prizes, including the 1990 Europhysics Prize, the 1995 APS Rahman Prize, the 2009 Dirac Medal of the ICTP, the 2009 IEEE Fernbach Award, the 2010 Berni J. Alder CECAM Prize for Computational Physics, the 2012 Fermi Prize of the Italian Physical Society, the 2016 ACS Theoretical Chemistry Award, and the 2021 Franklin Medal for Chemistry. Car holds honorary degrees from Italian and Swiss Universities. He is a member of the National Academy of Sciences of the USA since 2016.

The organizers strive to give an open space for the HPC community to interact and discuss visionary ideas. The three-day-conference and two-day-of workshops format is designed to combine knowledge and technology to deliver a compact event for all the attendees. The main topics will be HPC/supercomputing, AI and Quantum Computing. The program will include special sections featuring developments in India and Africa. In order to accommodate participants from multiple time-zones, the sessions will run between 7AM-1:30PM (San Francisco, LA), 2PM-8:30PM (Warsaw, Lagos), 6:30PM-1:00AM (New Delhi) or 9PM-3:30AM (Tokyo). This year’s conference is expected to draw attendees from Academia, research institutions and industry all around the world.

Join us at the event where no frontiers are needed when talking about science!

26th May, 2021
Virtual ICM Seminar with prof. David Winkler: “Computational insights into the origin of SARS-CoV-2 and repurposing of drugs for COVID-19”
BACK TO THE BLOG
This website uses cookies to improve your experience. We'll assume you're ok with this, but you can opt-out if you wish.    Accept
And here is our Cookies Statement.