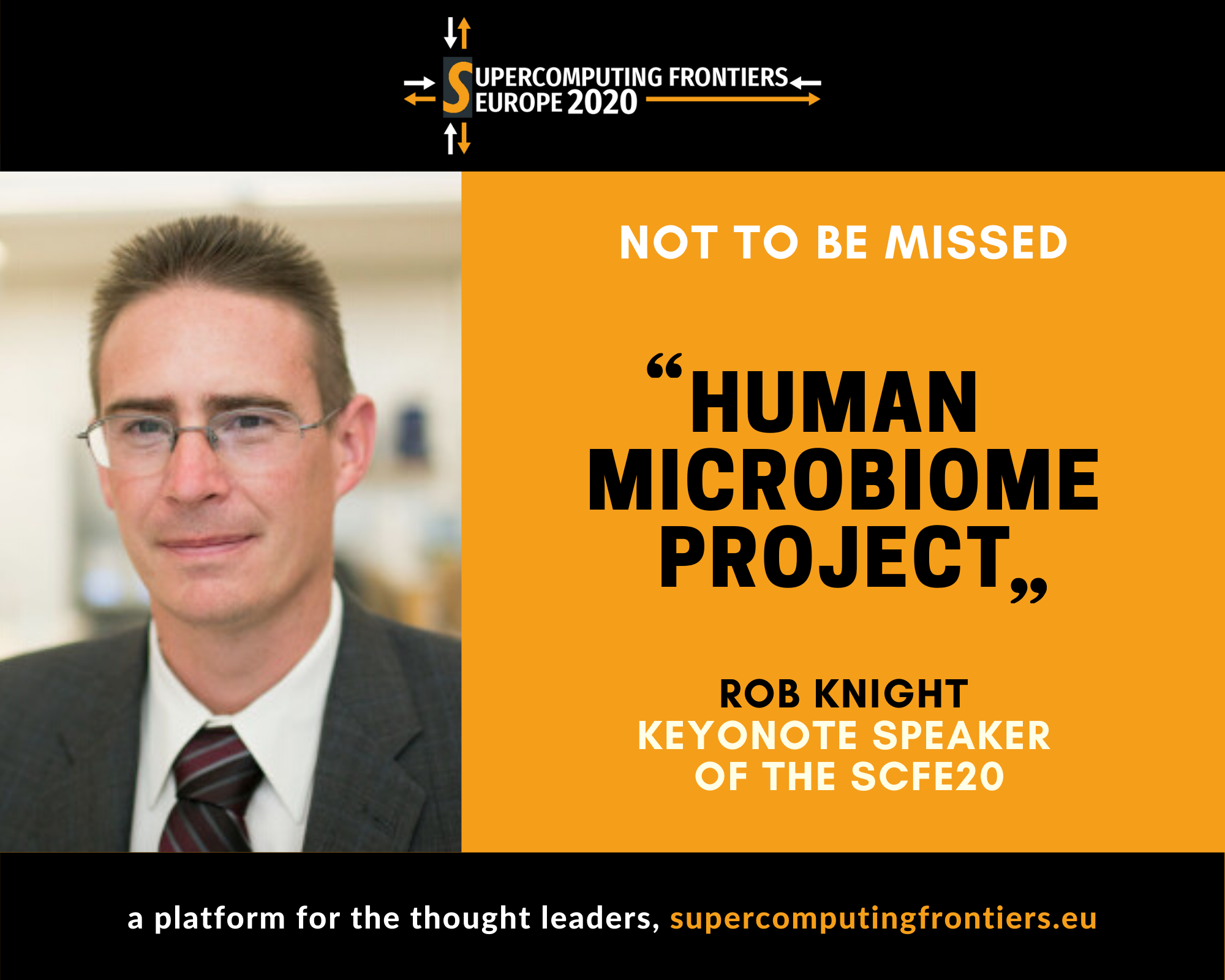 Professor Rob Knight from the University of California, San Diego (Center for Microbiome Innovation and Departments of Pediatrics, Bioengineering, and Computer Science & Engineering), will be one of three keynote speakers during Supercomputing Frontiers Europe this March. His work has linked microbes to a range of health conditions including obesity, autism and inflammatory bowel disease, has enhanced our understanding of microbes in environments ranging from the oceans to the tundra, and made high-throughput sequencing techniques accessible to thousands of researchers around the world.

“The Human Microbiome: Big Challenges, Big Data, Big Compute”
Our ability to sequence DNA has improved many orders of magnitude in speed and cost over the past 15 years. This enabling technology allows us to read out the human microbiome (the genes from the bacteria, fungi, viruses, and other tiny organisms that live on and in our bodies) on a massive scale, associating these microbes with a range of diseases from the expected (gut microbes are involved in inflammatory bowel disease) to the surprising (they are also involved in autism). Much of the data interpretation relies on shared resources backed by large compute. Here I discuss our rebuilding the tree of life on SDSC’s Comet, and efforts to predict the structures of all the proteins in the gut microbiome on IBM’s World Community Grid, and discuss the implications of these resources for building a user interface to our microbiomes that allows us to shape it for life-long health.

Rob Knight is the founding Director of the Center for Microbiome Innovation and Professor of Pediatrics, Bioengineering, and Computer Science & Engineering at UC San Diego. Before that, he was Professor of Chemistry & Biochemistry and Computer Science in the BioFrontiers Institute of the University of Colorado at Boulder, and an HHMI Early Career Scientist. He is a Fellow of the American Association for the Advancement of Science and of the American Academy of Microbiology.

In 2015 he received the Vilceck Prize in Creative Promise for the Life Sciences. In 2017 he won the Massry Prize, often considered a predictor of the Nobel. He is the author of “Follow Your Gut: The Enormous Impact of Tiny Microbes” (Simon & Schuster, 2015), coauthor of “Dirt is Good: The Advantage of Germs for Your Child’s Developing Immune System (St. Martin’s Press, 2017) and spoke at TED in 2014.

His lab has produced many of the software tools and laboratory techniques that enabled high-throughput microbiome science, including the QIIME pipeline (cited over 16,000 times as of this writing) and UniFrac (cited over 7000 times). He is co-founder of the Earth Microbiome Project, the American Gut Project, and the company Biota, Inc., which uses DNA from microbes in the subsurface to guide oilfield decisions.

Dr. Knight can be followed on Twitter (@knightlabnews) or on his web site https://knightlab.ucsd.edu/.

16th February, 2021
Virtual ICM Seminar with Ben Whitney [Oak Ridge National Laboratory]: "MGARD: Hierarchical Compression of Scientific Data"
BACK TO THE BLOG
This website uses cookies to improve your experience. We'll assume you're ok with this, but you can opt-out if you wish.    Accept
And here is our Cookies Statement.