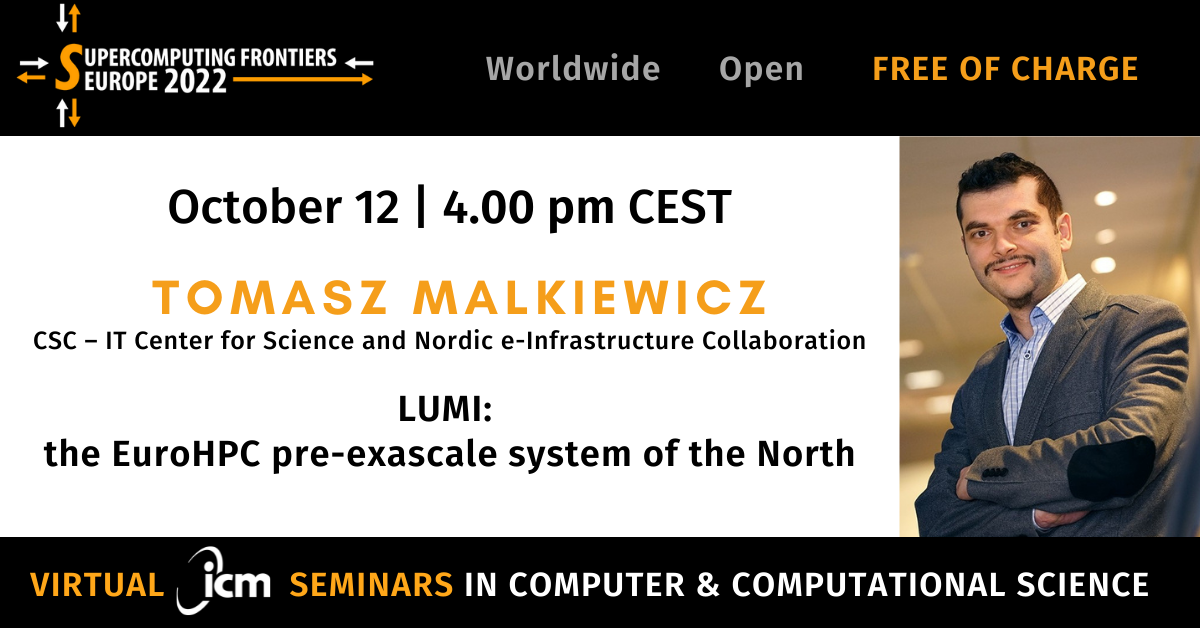 ICM University of Warsaw is back with Virtual ICM Seminars! The first meeting after summer break will feature Tomasz Malkiewicz from CSC- IT Center for Science Ltd and Nordic e-Infrastructure Collaboration (NeIC). Seminar will talk about the “precursor to exascale” supercomputer- LUMI.

Tomasz Malkiewicz during his presentation will focus on LUMI infrastructure, its great value and potential for the research community. On account of EuroHPC JU initiative and the exceptional idea of  creating “precursor to exascale” supercomputers in Europe, consortium of 10 countries was created (Finland, Belgium, the Czech Republic, Denmark, Estonia, Iceland, Norway, Poland, Sweden, and Switzerland) to share their experience and the know-how to host one of the most powerful and advanced computing systems on the planet at the time of its installation.

It’s going to be an engaging seminar where the audience will learn how the Nordic project was executed, from a business case to benefits monitoring after its completion.

Don’t wait and grab your FREE ticket to #VirtualICMSeminar, this Tuesday at 4am CEST!

Meet Tomasz Malkiewicz, his Alma Mater is University of Warsaw, where he got his Master Engineer degree in Physics. Subsequently, he moved to Finland to pursue his Ph.D. in Physics from University of Jyväskylä. In 2011, Tomasz started working at CSC – IT Center for Science Ltd., Espoo, Finland and currently is an Executive Manager at Nordic e-Infrastructure Collaboration (NeIC).

Interdisciplinary Centre for Mathematical and Computational Modelling – ICM University of Warsaw gathers outstanding scientists in a series of Virtual ICM Seminars, dating back to March 2020. With XVIII meetings so far and more than 1500 participants, ICM invites everyone to join its next seminar.

The website with access to the SCFE and seminars’ recordings, has been visited by more than 17k visitors from 122 countries. For the listing of all ICM seminars please check this link with recordings.